I want to share a great joy of which I never even dreamed! 14 April 2016 I accidentally learned from the media that in the famous pool tssk of the Navy will be re-opened walk of Fame Olympic Champions CSK NAVI, among whom are my father – Vladimir Akimov and uncle Anatoly.

The team at water Polo CSK NAVI in the history of sports, there were 10 Olympic Champions (1972, 1980). Among them – my father – Vladimir Akimov and uncle Anatoly Akimov. The team had a pool – CSK NAVI “Voykovskaya”, which has more than 30 years. After the collapse of the USSR did not become a great team CSK NAVI (sport in the Navy was closed), the pool was rented (these days there has long been a fitness club). The memory of the great players of the past became unnecessary, and the walk of Fame Champions were eliminated. Years passed and the efforts of these enthusiasts, such as Svetlana Ishmuratova, Ayrat Zakirov and others in the pool tssk of the Navy was re-opened gallery of Olympic Champions in water Polo.
History

It happened a miracle and so suddenly that I was stunned and urgently contacted the organizers and asked them to invite me as a spectator to the podium. 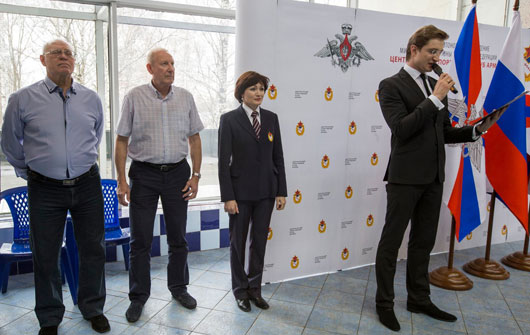 I was invited to come the day before to get acquainted, and I learned a number of details of the event. Randomly in the conversation came up that everything was ready, but this important event… no lead!..

That’s for sure – nothing on earth is random. Thus, in less than a day, I was leading this historic ceremony. For me this is a landmark event. I am very grateful for that fate! There are moments when you realize that it will take years, decades, you will forget many things in life, but this day will always remember. It was just such a day, and I found myself in the middle of it. 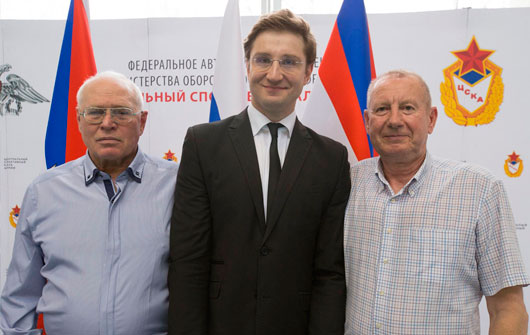 The memory of the great team water Polo CSK NAVI, 22 times becoming the winner of the national championship, was immortalized in the pool on the Leningrad highway.

15 April 2016 was cut a red ribbon with two Olympic Champions in water Polo – Nikolay Melnikov and Vyacheslav Sobchenko, as well as the double Olympic Champion on biathlon Svetlana Ishmuratova (CSKA Moskva). Flags-banners with the names of legendary athletes raised under the arches of the sports complex.

Historical video from the opening ceremony of the Glory Alley of Olympic Champions CSK NAVI:

The event ended with a friendly match in water Polo among children’s sports schools. On the edge young athletes came in t-shirts with the names of the 10 Olympic Champions CSK VMF. It was very touching to see such sport connection of generations, seeing a «small» Akimovs, Dolgushin, Sobchenko, Gulyaeva, Zhmudskaya and other great athletes.

I remember every second of this event! A big thank you to all those who were able to carry out the return of the memory of the legends of Russian and world sports on the orbit of History!

Material about this event on the official website of CSKA: http://cska.ru/