Vladimir Akimov was born in a large sports family. The mother – Elena Evdokimovna and father (war veteran) – Ivan Illarionovich were not athletes, but their five children connected their lives with sports.

Vladimir Akimov played sports since childhood, but this period is known little.

CHILDHOOD. THE EARLIEST PHOTO OF MY FATHER

I managed to find an unique photos which had previously never been published.

The first photo was made in 1960 in the town of Alabushevo. Here my father is 7 years old, to the left of him – his father and my grandfather – Ivan Illarionovich.

In two following photos it is difficult to determine year, but in there Vladimir Akimov is engaged in children’s theatrical performances. Also unique photo from the father’s childhood – Vladimir with his sister Tatiana.

In two following photos – Vladimir at the marriage of his brother – Victor Akimov, October 11, 1968.

THE CHAMPION. Pioneer camp «ARTEK» in the Crimea. 1963

The unique photo of 1963 was found where my father is 10 years old. We can see the tape on his chest, it is possible to read an inscription on the tape: “Champion. Artek”. Probably, this is one of his first victories, which is somehow connected with the pioneer camp. 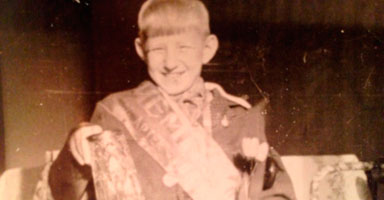 Photos from Vladimir`s youth, on one of the photos he stands in a hat with number “2” (later he always played at number “3”).

On another photo the honored trainer Somov Yury Aleksandrovich who has brought up the large group of great water polo players.

The third photo is made in 1970 in the city of Dzerzhinsk in the team “Youth”, which became the winner of championship of the USSR among young men of advanced age (to the left of the father – A. Krylov, to the right – S. Yeliseyev).

The following photo – the general plan of the team with the trainer. On the reverse side of that historical photo the trainer Somov wrote in 1971 to Vladimir Akimov some sympathetic words, there were such interesting lines: “I wish You the same Olympic success in big sports …” Whether Yury Alexandrovich could think, that after 9 years, his pupil will be the Olympic Champion! 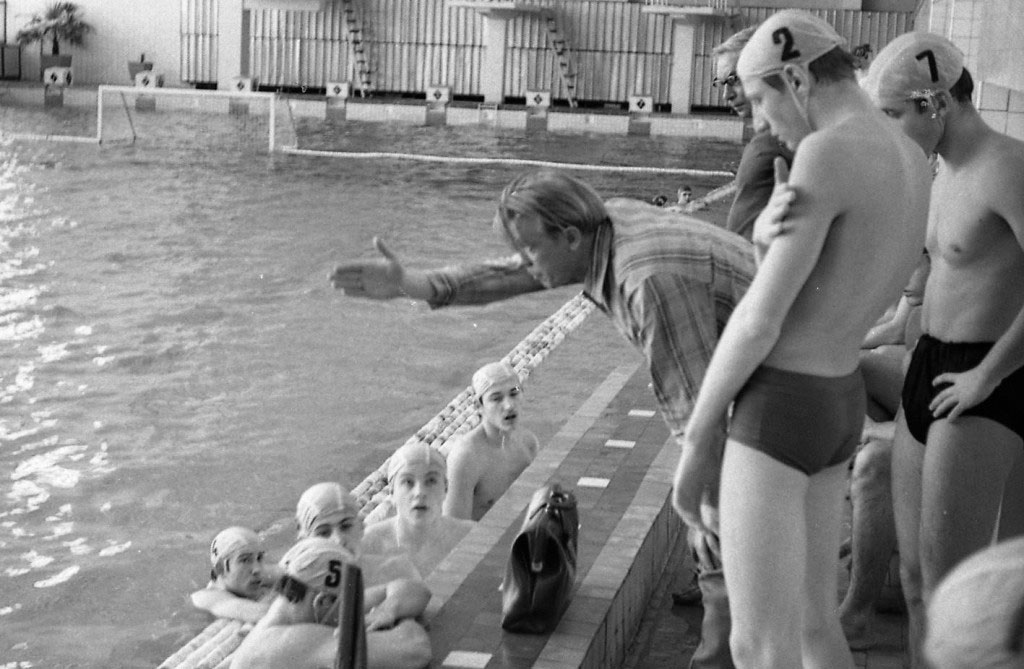 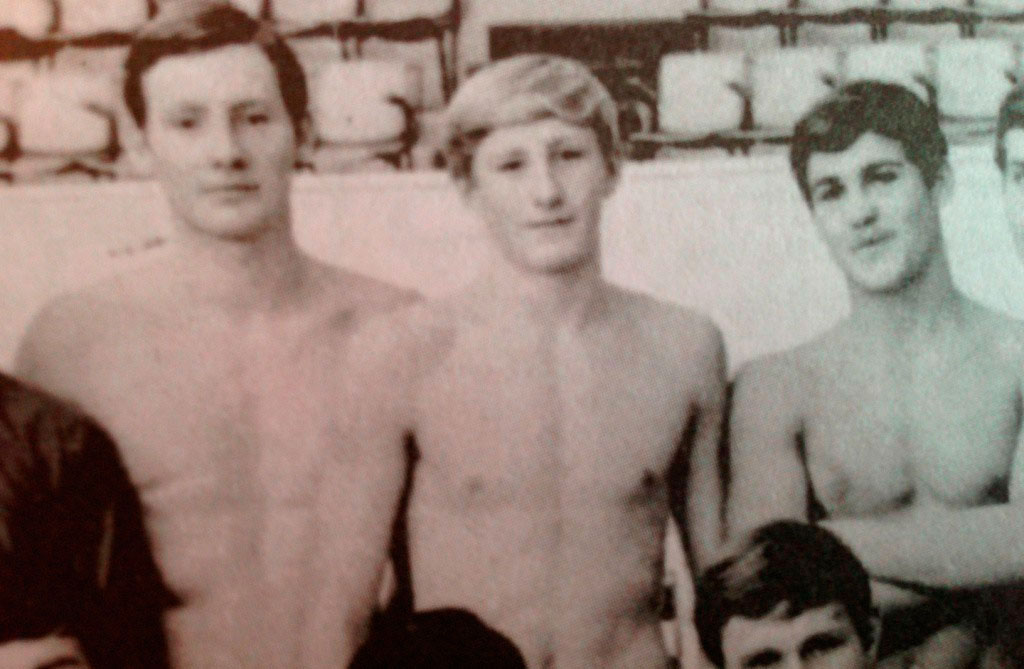 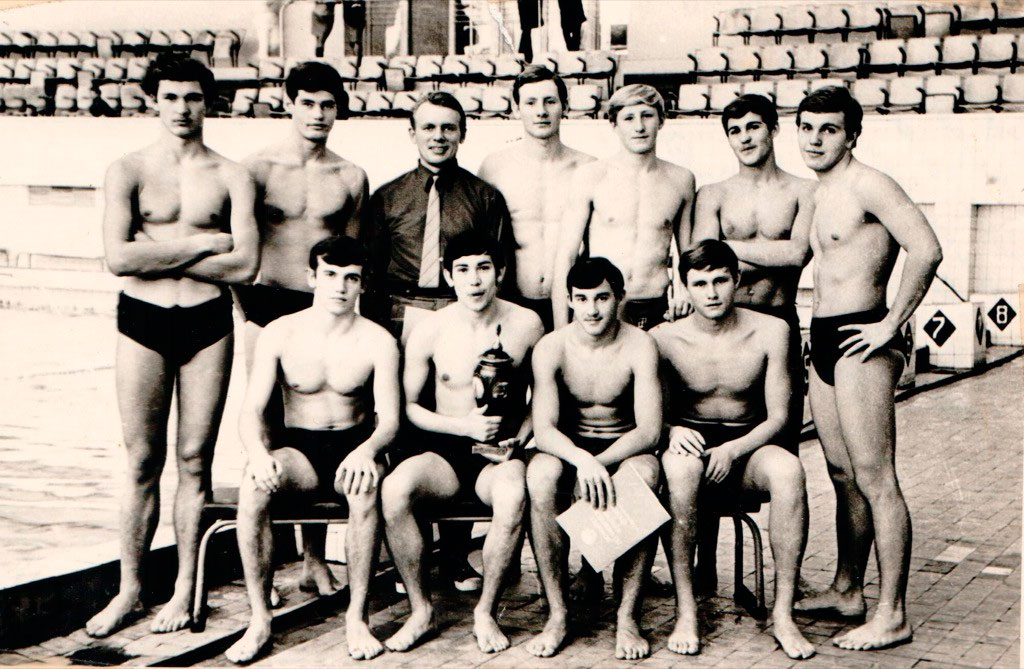 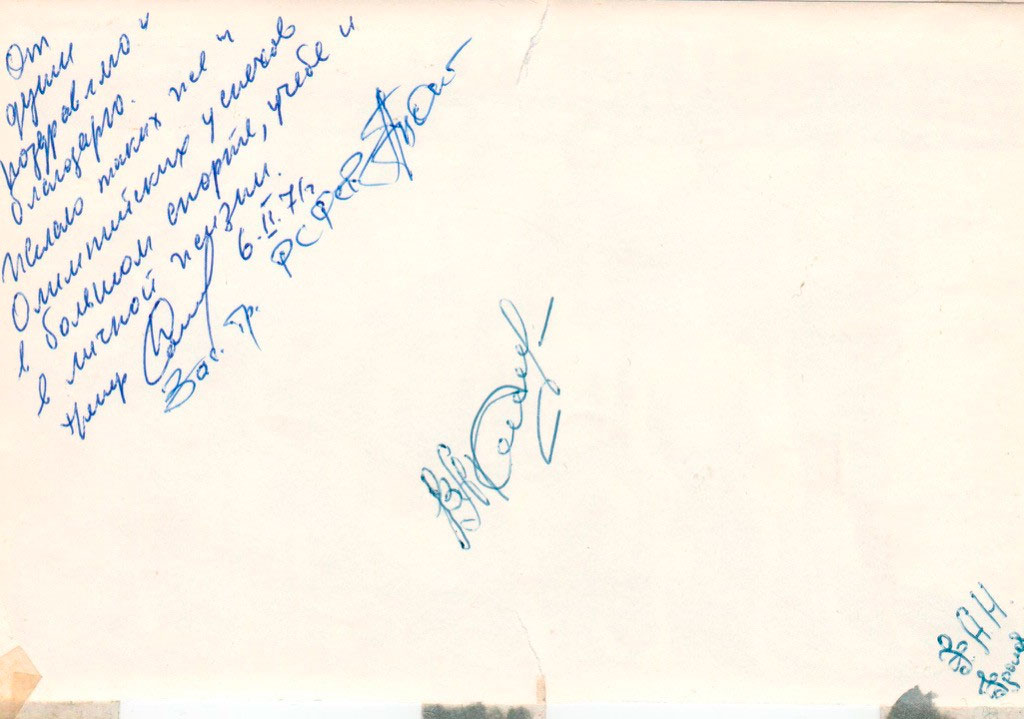 Thanks to the water polo player Yury Yakovenko, I have succeeded to find two unique photos of 1971, when Vladimir Akimov was a member of youth team of the USSR on water polo.

The youth team of the USSR became the winner of a tournament of Friendship in Romania. My dad is only 18 years old on these photos.

On the first photo – he is the first at the left (Yury Yakovenko to the right of him), on the second — in the center with a broken and plastered nose.

On a photo where all of us stand in Romania, in the process of the game the nose of Vovka (Vladimir) was broken and directly from a match Vladimir was taken away to hospital. After surgery the nose was plastered. The face was unrecognizable to such an extent that when we have arrived to Moscow, guards in Sheremetyevo laughed and asked Vladimir – “Who are you?!

Photo 3 from training camp in Romania. Photo: 4-5-6 – supplied water Polo player Andrei Frolov from the family archive. In these photos we see rare footage of me training. The seventh picture (from the archive of Yevgeny Sharonov) – Olympic champion-1972 Aleksey Barkalov and my very young father – Vladimir Akimov. Several years pass and dad will win the Olympic gold medal, together with Aleksey Barkalov at the Olympics in 1980. 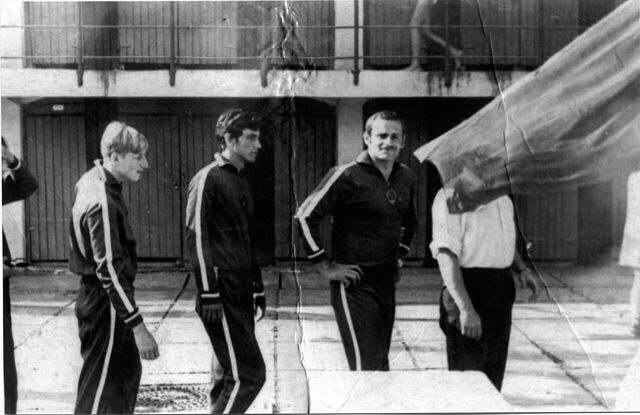 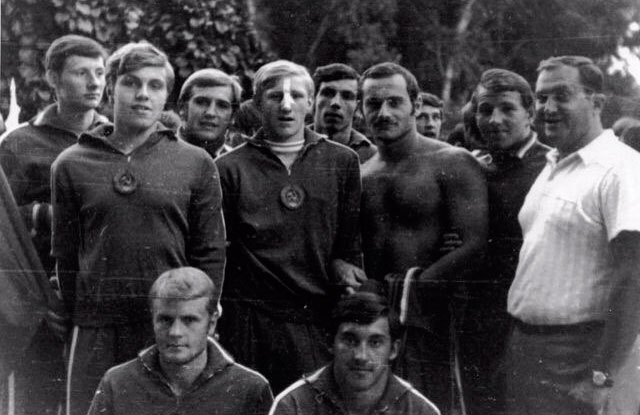 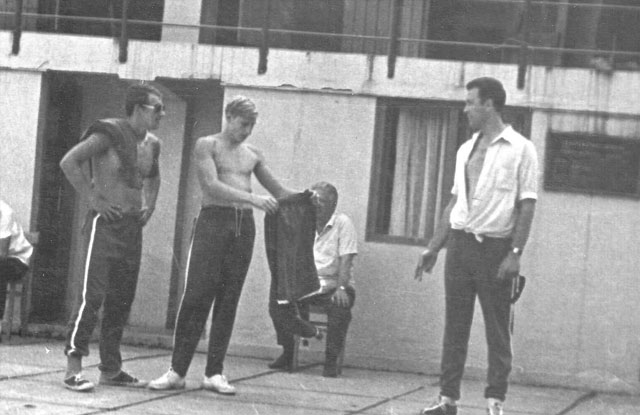 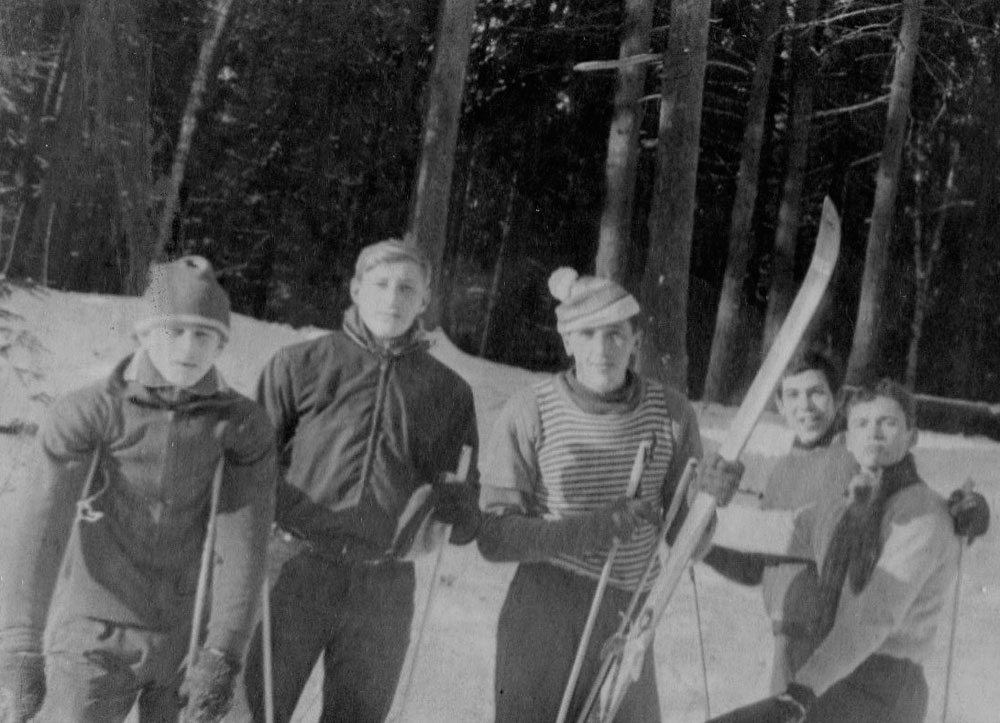 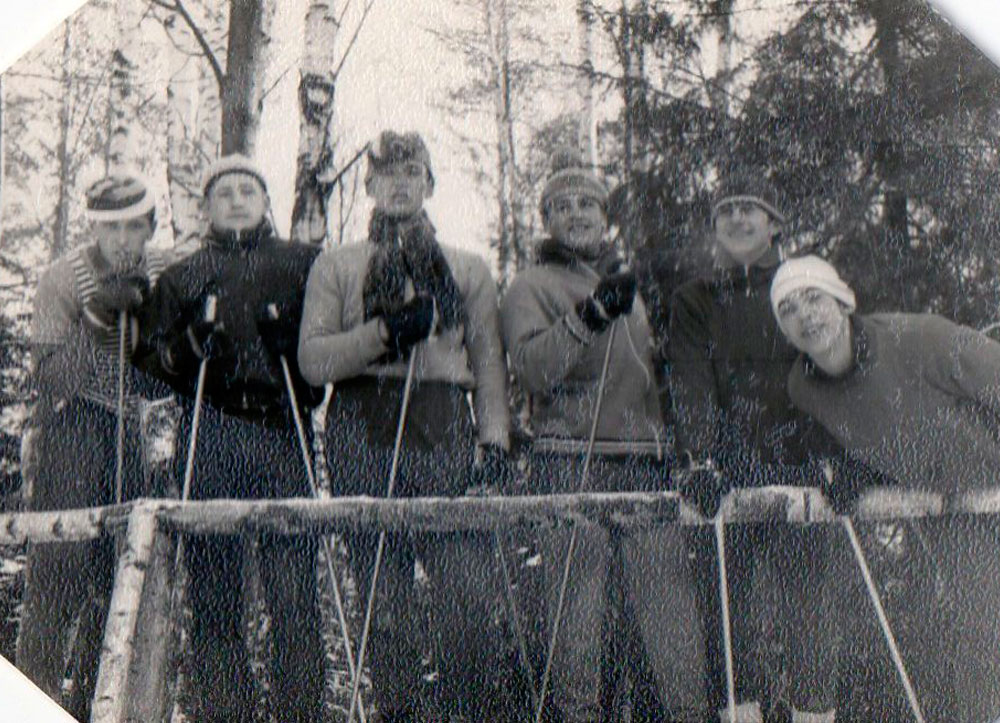 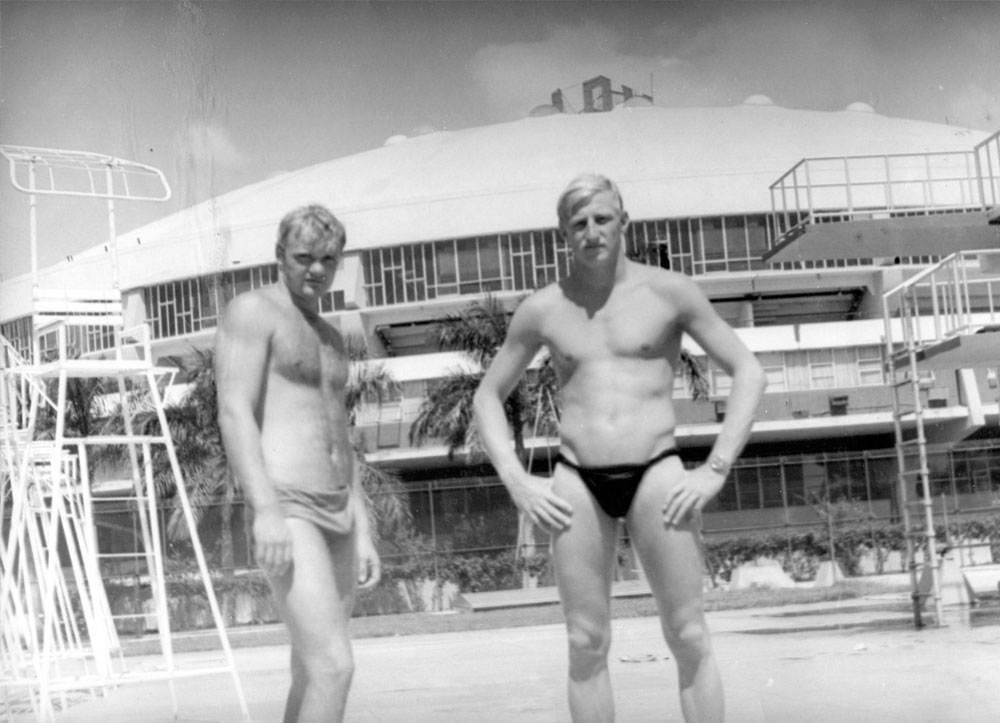 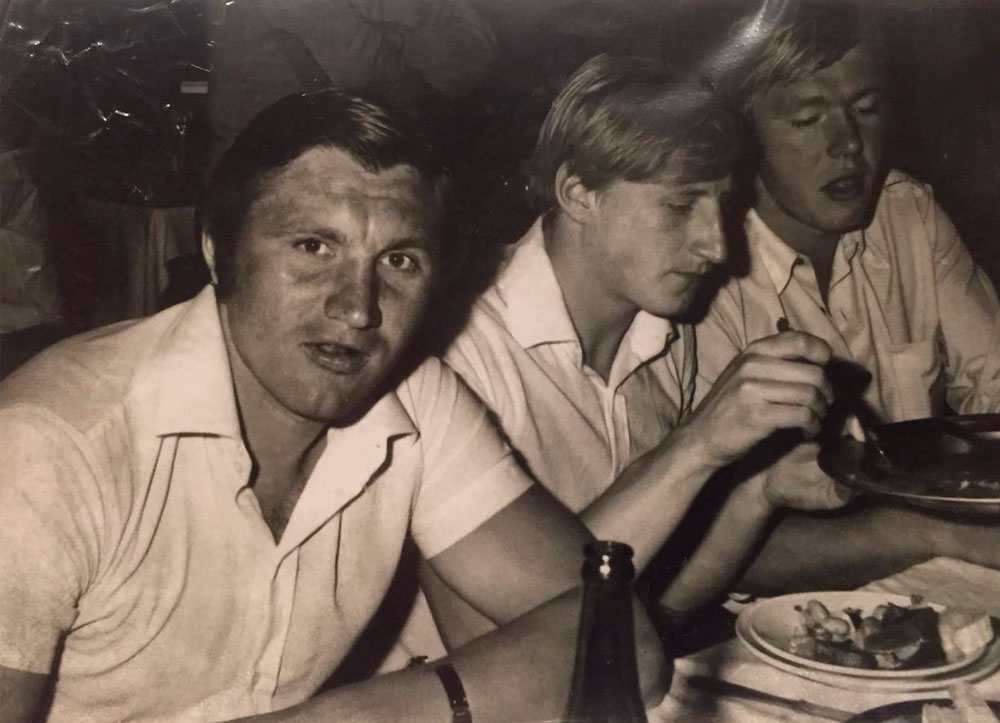 Thanks to this diary it is possible to understand the circumstances of formation of the personality and sports skills of future Olympic Champion. I will carry out the small review of 1973 by eyes of my father who was 19 years old, and in July, 1973, he was 20 years old.

It is a wonder that one of the diaries of my father of 1973, specifically the fourth, has survived. So, now we have a chance to judge early sporting achievements of Vladimir Akimov.

He played in the TsVSK Navy team (so it was called) and in the national team of juniors of Moscow.

The year begins with the meeting of athletes from Moscow juniors team in the town of Khlebnikovo on the Klyazma river. In the first day Vladimir became a captain of the team in the result of the election. The schedule of trainings and the level of preparation were impressive and even mind-blowing!

Three workouts a day, the beginning at eight o`clock in the morning. Except the water polo program the team works on technology of game, developing the strikes of the ball. The team is engaged with the weights, runs in the wood and plays all possible game sports — basketball, soccer, volleyball, hockey.

Here some pages from the diary of Vladimir of that time — January, 1973. On the third page we see, that in a training swim nineteen-year-old Vladimir Akimov was the first, showed the best time: 500 meters – 6 minutes 50 seconds, 1000 meters – 13 minutes 40 seconds. 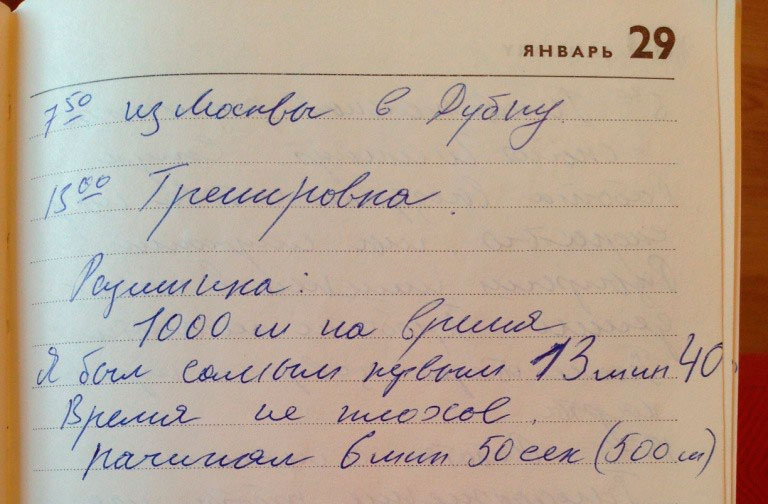 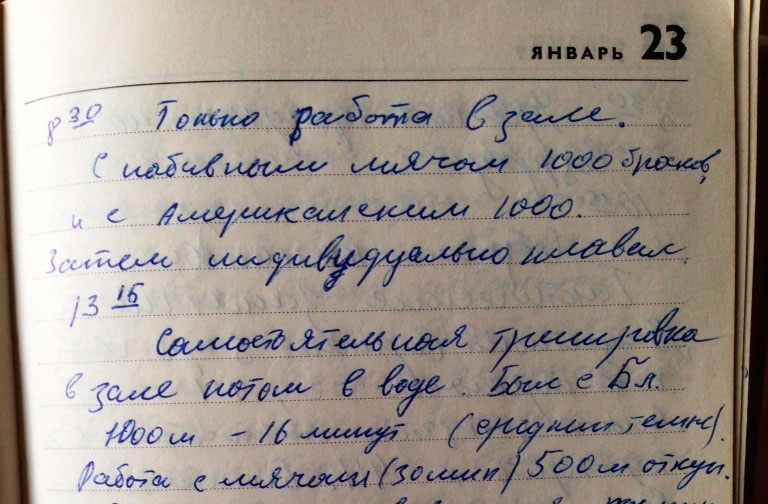 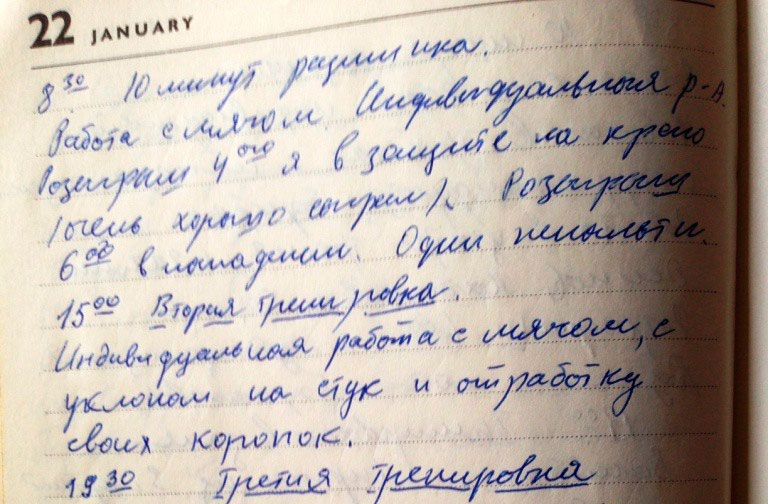 The 1973 year was very eventful in sports career of Vladimir Akimov. Continuous sports collectings, games on the cities of the Soviet Union, the championships and water polo championships, a trip to Cuba.

In the diary he constantly writes that it is necessary to improve the skills, to play better. The father complains that “I have won the next game, but played bad”, “I have again pulled out a victory, but played shamefully!”

However his Junior team won the team of masters! Three more pages from the father’s diary: February-March, 1973. On the third page (10th of March, 1973) the father writes that for the first time overcome 1 minute, having swam 100 meters in 58:05 seconds: 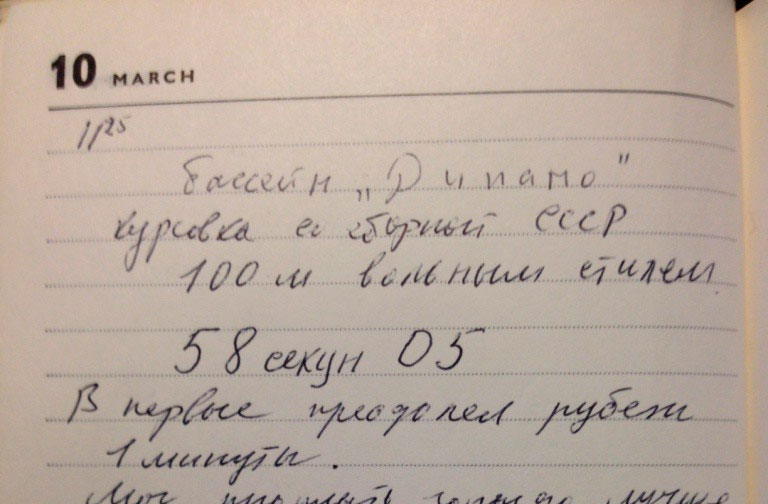 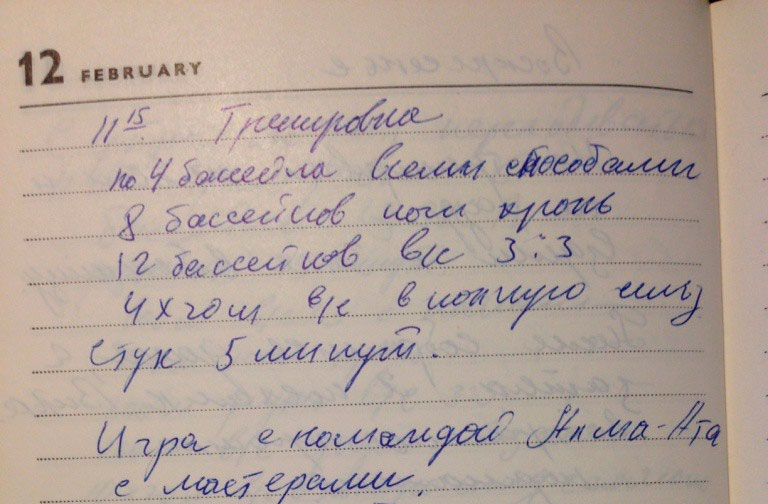 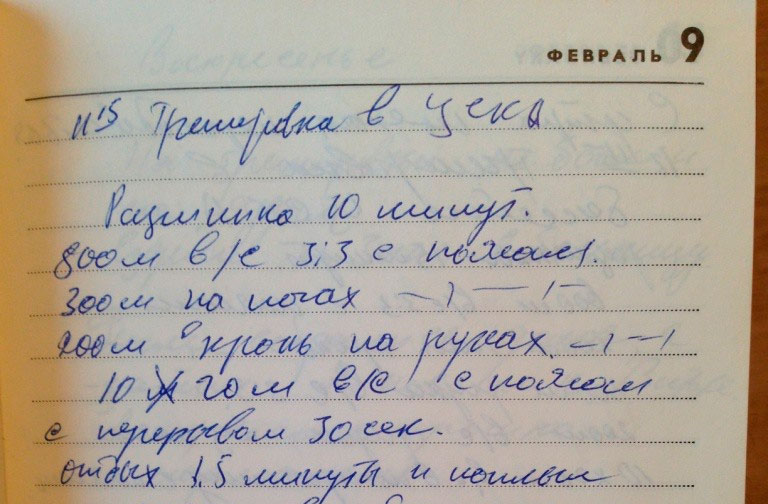 APRIL 1973: «ONLY IN PERSISTENT FIGHT WITH YOURSELF IT IS POSSIBLE TO BECOME THE GOOD ATHLETE, THE PLAYER…»

Every month Vladimir summarizes the results of his sports work and sets new tasks, makes conclusions.

In the end of April, 1973 my father writes in the diary that the sport defeat dashed everything.

He says: “I still can do nothing!” And also draws tremendous conclusion in his 19 years: “Only in persistent fight with yourself it’s possible to become the good athlete, player …” He sets for himself a task — to win the European championship among juniors, the Sports contest of juniors for the national team of Moscow, to be the best in Germany and to be a member of the USSR national team on the World Cup in Yugoslavia…

Below you can see all these thoughts written by 19-year-old Volodya Akimov’s hand. On the third page – the beginning of the Games, which has begun with defeat of the Russian Federation team, the part of the national team of Moscow into which my father has entered. 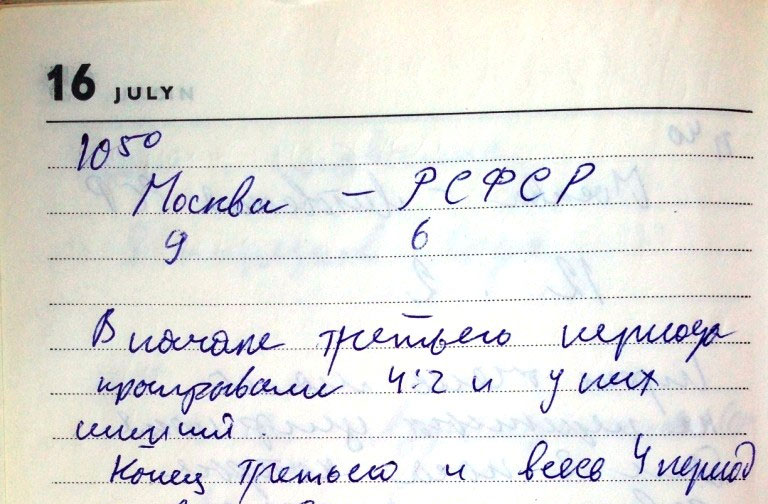 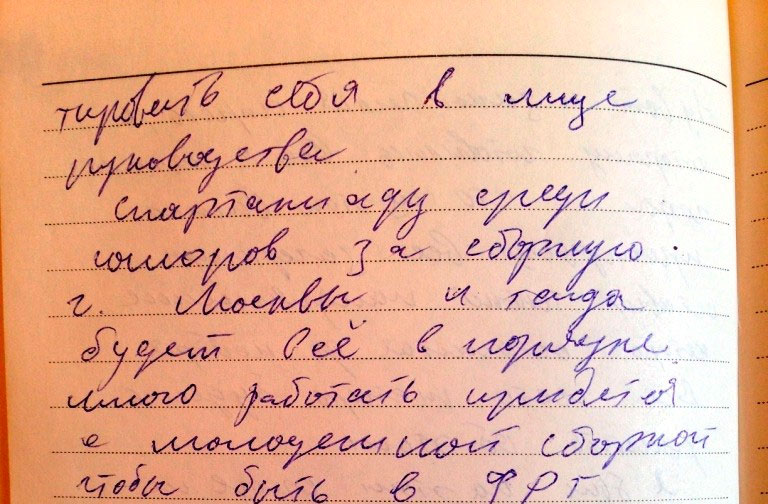 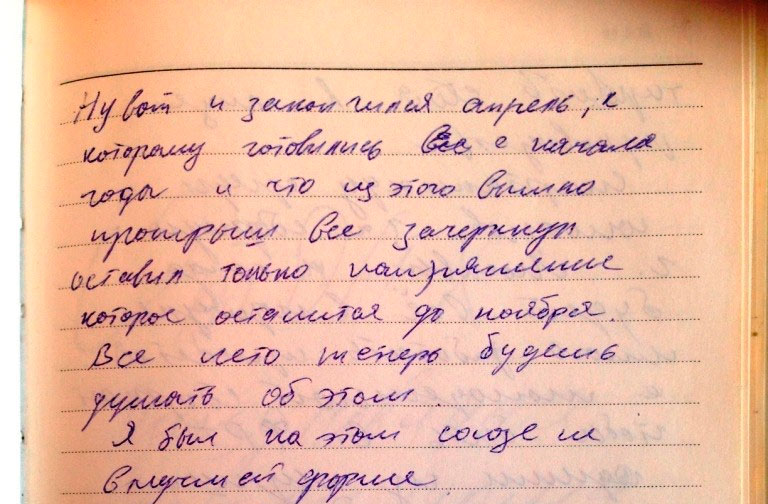 Another idea of Vladimir is very typical for him: 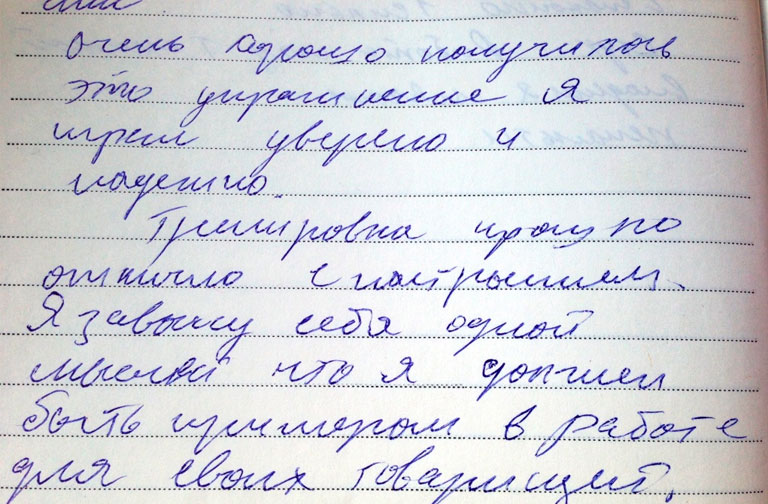 JULY-1973. 20 GOALS scored in THE TOURNAMENT IN ALL-UNION GAMES OF YOUTH!

July, 1973 was especially bright and eventful in connection with All-Union games of youth in Lvov.

Vladimir has brilliantly completed all the tasks set at the end of April and worked real miracles in a national team of Moscow.

At the last day of a tournament the title of the best defender was awarded to Vladimir Akimov! The most amazing thing is that the father scored twenty goals in a tournament, being a defender, not the forward! Here are three pages of the father’s memories of these days. 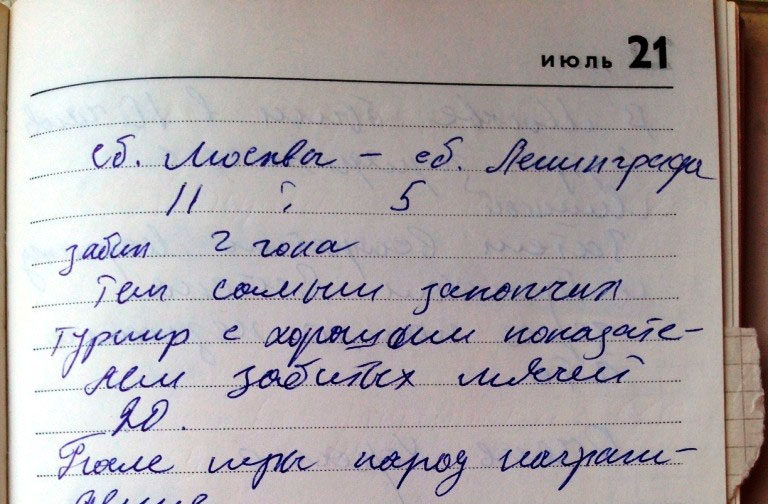 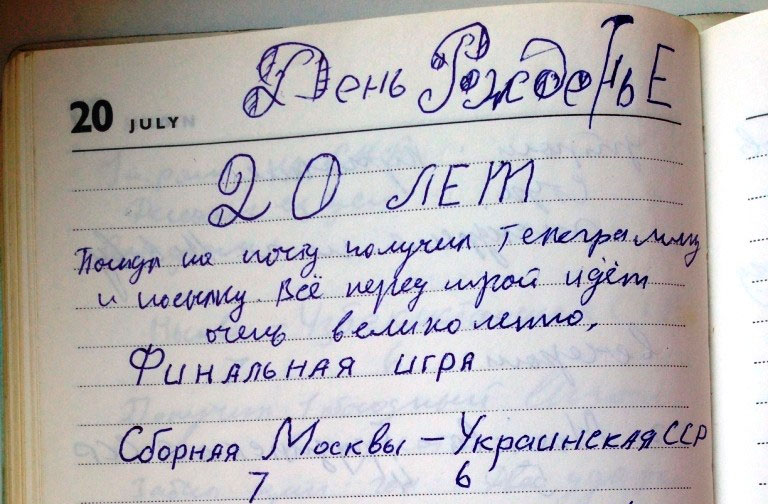 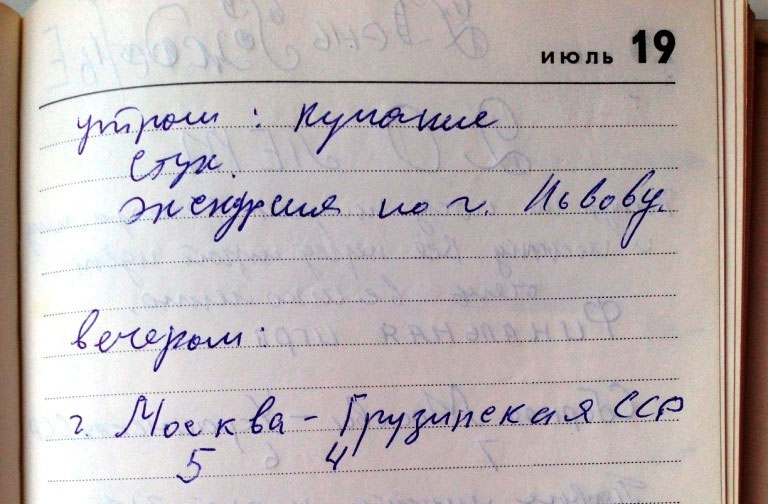