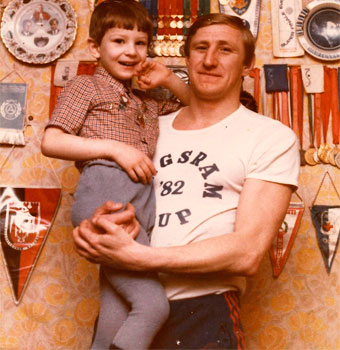 In childhood I seldom saw my father — he was always at training camps, games, Championships in water Polo.

My dad was difficult at times, so my parents divorced when I was 6 years old and we talked to him very little. In 1987 my father died when I was only 10 years old.

When I grew up, I discovered there is not much information available on the Internet. I decided to collect material that will be interesting not only to me but to a wide range of people — from sports fans to a new generation of athletes.

I have received letters from all over the world with requests to tell about dad, I spent more than 10 years to locate, upload photos, collect and organize bit by bit, to put together what is presented on this website.

I hope that by creating this website I can contribute to a return to the orbit of modern history, not only sports hall of Fame in memory of my dad, but many prominent athletes of his time and a legendary team CSK NAVI.

UNIQUE VIDEO WITH SNIPPETS OF THE GAME, WITH VLADIMIR AKIMOV IN THE 1980 OLYMPICS.

Ipresent a video with excerpts of Vladimir Akimov`s game at the Olympiad in 1980. I made this clip to the 60th anniversary of Dad, of the two most brightest and most challenging games in water team history from the Yugoslavia and the Hungarian national teams.

In the video you can see the phenomenal work in the defense of Vladimir Akimov, ripping off attack after attack of the most powerful hitters of the world, and keeps the best players at the gates of the USSR national team.

Besides the brilliant work of the “Defender – destroyer” (as he was named by the Olympic champion, member of the team of the USSR, Erkin Shagaev) the video shows two goals by Vladimir Akimov against Hungary and Yugoslavia:

VLADIMIR AKIMOV IN THE OLYMPICS-1980

My father died three years ago. I am 13 years old, and study in the seventh grade at school. We are going to Kiev by train on excursion. I`m in one compartment with two Ukrainian men. They talked all the way about their affaires, and then pay attention to me, “Hey, fellow, come down from the shelf to have a talk over a cup of tea…” I climbed down from the top shelf and sat down with them at the table.

Tea was immediately set aside and the feast began with the best dishes of Ukrainian cuisine in the buffet-car, and I got all sorts of delicious things in a gift, and a pack of Ukrainian coupons, too, to buy food and things in Ukraine in these difficult times of so called “perestrojka”. Our companions all the time enthusiastically talk and talk about the impressions of the Moscow Olimpiad-80, and I suddenly realized that the day will come, I will be able to learn about father’s merits more than I knew before, when he was alive…