1983 became critical in Vladimir Akimov’s life. On the one hand — the last victories: a victory on the Sports contest of the people of the USSR, a victory in the USSR-1983 Championship, and on the other hand – an expulsion from the USSR national team, and then his withdrawal from CSK Navy military team.

In the result of conflict with the senior trainer Vladimir became a reserve player that was just unacceptable for ambitions of the Olympic champion and the World champion.

The father’s friend, the Olympic champion (1980), the Honoured Master of Sports Mikhail Ivanov (“Dynamo”, Moscow) told in one of the interviews: “Vladimir Akimov’s expulsion from the national team of the Union became the real shock not only for our fans of water polo, but also for all rivals — team players of Germany, Yugoslavia, Hungary and others which always asked: Will he be back in the lineup of the team or not?” His opponents feared him and respected him simultaneously!” 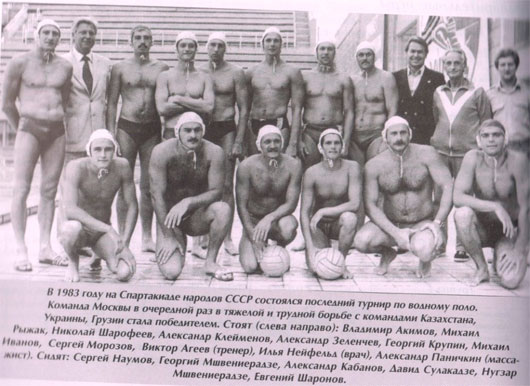 On the photo: 1983. Vladimir Akimov (costs extreme at the left) in a line-up of the team of Moscow on water polo on the Sports contest of the peoples of the USSR. The last large victory of the Honoured Master of Sports in his track record. Vladimir was 30 years old.

Full record of interview of the Olympic Champion Mayt Riysman about Vladimir Akimov illustrated by a photo and video records.

Vladimir was very honest and very decent person. Such direct sincerity and frankness, as at the child … I have seen at trainings that he didn’t do himself any indulgences and always gave all the best to the last. He had contradictions in the CSK Navy military, and in the USSR national team he was at the same time the main player. You understand it is really a paradoxical situation?! Popov and Shidlovsky — the two most great trainers who had absolutely different approach to Vladimir. Boris Nikitich Popov has found an approach for the USSR national team in which Volodya was the main defender. A paradoxical situation — one expert has a good relationship to the athlete, and another — absolutely opposite…

Interesting, open and sincere person. The fact that he played great as a defender – again, it was in his nature. The fighter was from the beginning to the end in his quest to beat the striker to leave in counter-attack… Inquisitive, eager for knowledge… the kindest words as athlete and man.

Memories of Viktor Ivanovich Ageev· silver and double-bronze medalist of the Olympic games. Honored master of sports of the USSR (1964).

THE TRANSITION TO TORPEDO TEAM

All constraints were broken by departure from the USSR national team and by withdrawal from CSK Navy military. There were conflicts, there was an alcohol. In 1983 my parents got divorced. I was only 6 years old. The father has gone to Torpedo club where he was greeted with joy.

A unique photo — Vladimir Akimov (costs the second at the left) as a part of the water polo Torpedo team (from Shchegolev Alexander’s archive – on a photo to the right of the father):

Irina Maslova tells about this period: “Vladimir Akimov really was an idol for everybody. When he trained a youth team of “Torpedo”, in spite of the fact that he was strict with the young athletes, he was just idolized.

All athletes were proud that they are trained by Akimov! Phone call came constantly from all over the world. Volodya was a fair person with the kindest soul.

How many people he helped, absolutely selflessly! He was the responsible and decent Person, and has kept all his promises! Vladimir always said the truth and could stand the hypocrisy…”

A pleasant and unexpected interview of 2018 A. G. Shydlovsky. During the life of Vladimir Akimov their relationship was strained and bad. It’s nice that years later, Alexander Shidlovsky warmly about Vladimir and the entire dynasty Akimovs:

Water Polo Akimovs – was very strong-willed athletes. It was not fear of the enemy. Volodya Akimov – he was a hardworking, very responsible and most skilful of the brothers. He had long arms, gorgeous swam, played ahead of the curve. Tactically well-prepared, almost no wrong. Rooting for the team, for its result is very important… Volodya was the outgoing athlete literate. Such players are few. Akimovs was in the shower the Winners, and the Winners are a special caste, which is transmitted from generation to generation…

Memories Alexander Shidlovsky· the champion of summer Olympic games of 1972 in water Polo, silver medalist 1968, Honored master of sports of the USSR, the coach of the team CSK NAVI.

MY LAST MEETING WITH FATHER

I have well remembered our last meeting with father. Shortly before his death we have met him, and he has led me to the pool of “Torpedo” on “Avtozavodskaya” metro station. 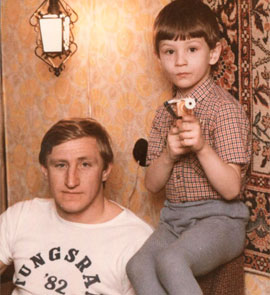 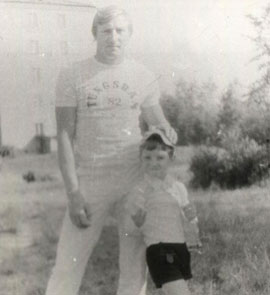 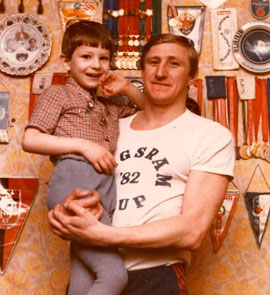 In spite of the fact that in my 9 years I was perfectly able to swim, dad decided to help me. He told me to held his legs, and them began to swim a crawl style. It was strong impression and the real shock!

I didn’t expect that human being can swim with such madness speed! I hardly managed to take off from water to breathe. Such impression that I was tied to a motor boat! I have felt similar feelings many years later when I swam with dolphins…

My grandmother on my father`s side, Elena Evdokimovna, told me about the last hours of Volodya’s life.

She told about the moments of understanding that all occurs incorrectly in his life and he wanted to change everything to the best. It is surprising but sports victories of the past have inspired him. In the last days of his life he began to wear on a neck a mascot — the gold medal from the water polo World Cup of 1982 which took place in Ecuador. This medal became for him a charm and a symbol of future changes.

In the evening on October 4, 1987 father has took off this medal and has asked mother to move it away, having told that he goes to a meeting on a work occasion. In the evening of the same day Vladimir Akimov has got to a terrible street brawl in the square near Avtozavodskaya metrostation (behind a monument to the heroes of Patriotic war), and with the most severe craniocereberal trauma has got home to the friend (Avtozavodskaya Street, 5). The friend, being “tipsy”, thought that Vladimir just sleeps on a shop, has dragged him home and put to sleep on a bed where father has fallen asleep and has died in a sleep in the night of October 5, 1987 … He was 34 years old. 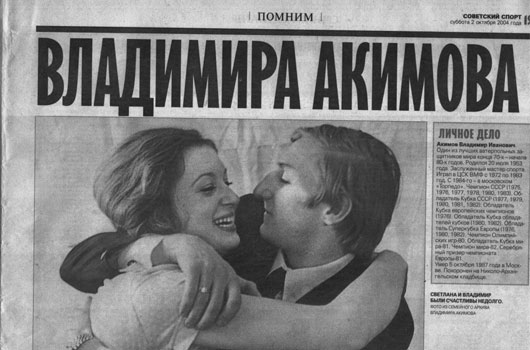 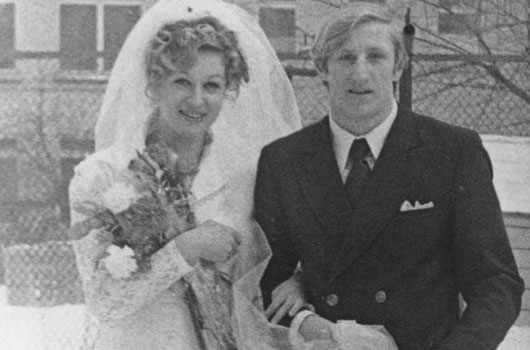 The Unique and never anywhere wasn’t published earlier the material — the last lifetime video 4 years prior to death (1983). Vladimir Akimov on a private holiday, among friends water polo players:

Vladimir Akimov is buried on site 64 “A” of the Nicolo-Arkhangelskoye cemetery. Circumstances of father’s death — are mysterious because in the area — the Avtozavodskaya subway all knew and loved the Olympic Champion (Akimov’s family lived on 3rd Avtozavodskoy Drive in the house No. 4).

It is known that his (now the dead) brother — Anatoly Akimov has sworn to find murderers on Volodya’s grave and as have written later in the press: “He could make nothing!” In 1995 at the age of 18 years, I have met Anatoly Akimov and asked him a question: “Whether Father’s murderers are found?” Anatoly Akimov answered: “Who has killed Volodya — they dead for a long time …” I have done a great job and have learned that it is the truth … 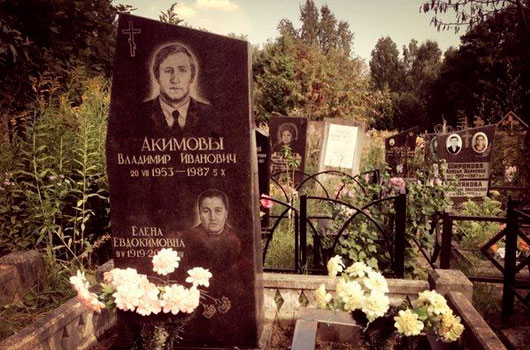 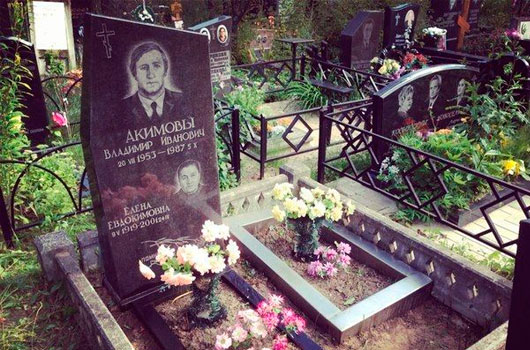 Vladimir Akimov — one of the strongest defenders of 70-80 has played a big role in education and formation of defenders of the highest class – E. Grishin, N. Mendygaliyev and other young defenders of that time. Vladimir helped me in development of game against defenders of different styles. He was a good friend and the trustworthy person. We had friendship relations in spite of the fact that we played in different clubs. Volodya had great respect both among us, and among foreign players and experts. At meetings on veteran tournaments we always remember Vladimir Akimov as the great water polo player of the world!

We were on friendly terms with Volodya, such a triangle — Barkalov, Akimov and Sharonov. Persons of three generations … There have passed years and at distance everything already seems in a different way. Volodya was very valuable player, original and unpredictable. He hammered very important and necessary balls. Well, and in life I was very kind and sympathetic … Of course it is a pity that Volodya so has early left, it is a pity … Really, the Great athlete, the outstanding person, all of us remember him…

Evgeny Sharonov («AZLK») remembers· The Olympic Champion (1980), the World champion, the President of Federation of water polo of Russia

Full record of interview of the Olympic Champion Evgeny Konstantinovich Sharonov about Vladimir Akimov illustrated by a photo and video records:

In 2010-2011 I have incidentally seen in the square in Tverskoy Boulevard of the actor Nikolay Karachentsov. He was in a serious condition after all undergone operations. I have approached him, have greeted and have asked: “Do You remember Volodya Akimov?” It was difficult for Karachentsov to speak, but he has begun to nod, has smiled and has said in low tones: “Akim!” I have told him: “Volodya has died …” Karachentsov has begun to rock the head and on his face tears … have begun to flow.