This period — one more bright strip in Vladimir Akimov’s life. He continued the game in the CSC Navy military water polo team, brought to legendary club a victory behind a victory, but played too time for the water polo national team of the Soviet Union, bringing to the country an award behind an award.

Here the publication in the newspaper of that period — the CSK Navy military team on water polo becomes the owner of the Cup of the USSR: 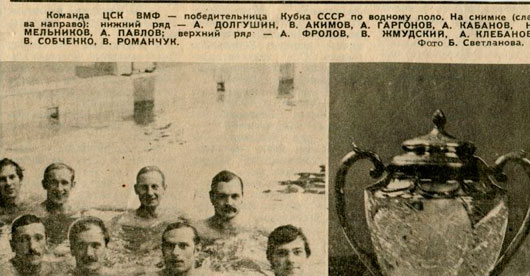 Here are two more interesting photographic materials from Vyacheslav Sobchenko home archive. The first photo — the CSC Navy military water polo team in the pool “Olympic” in 1980 (Vladimir Akimov is on the far right); the second shot — article in mass media about CSC Navy military victory of the team on the Cup of the Soviet Union of 1981 (Vladimir Akimov is on the far right): 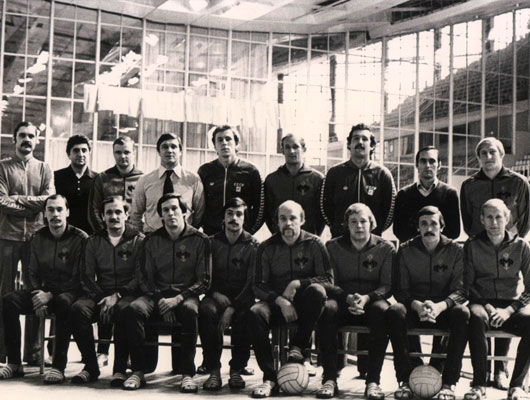 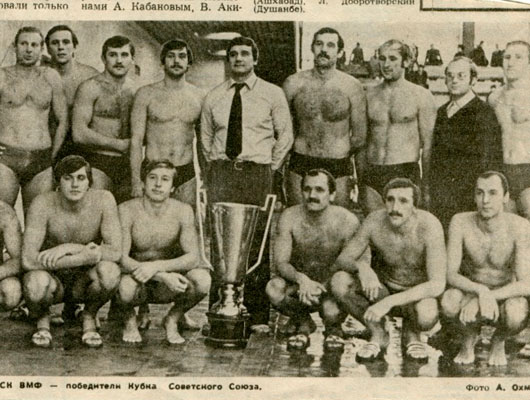 The rare photo of the CSC Navy military team in the «Moskovskaya Pravda» newspaper from December 16, 1980 and article about a victory of the team in the Supercup game of the European countries. About this unique and probably unprecedented game I was told by Vyacheslav Sobchenko. It was a spectacle which has no analogues! 10 periods!

My father, according to Sobchenko, scored important goals in this game, and one of the goals was in general surprising — Vladimir Akimov has scored a goal with his left hand! 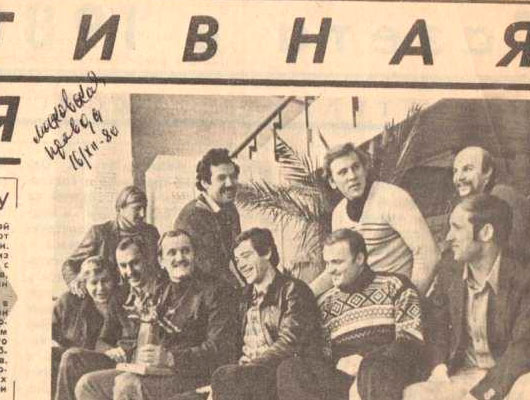 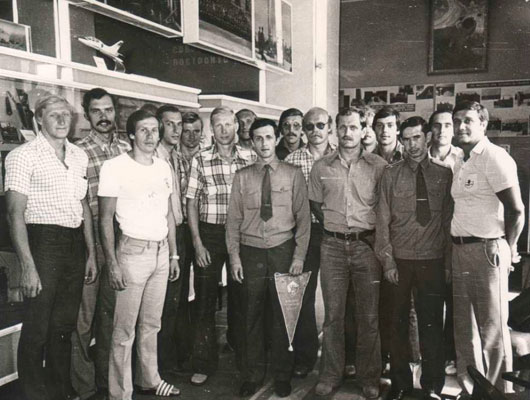 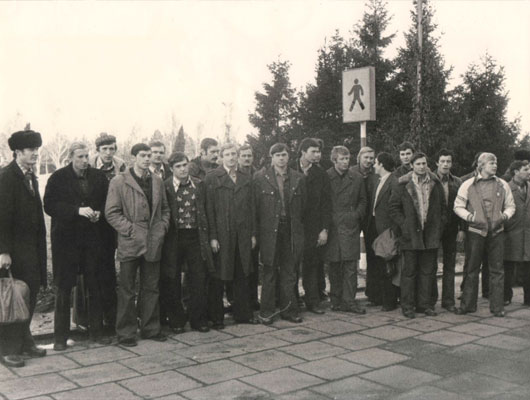 It is well known that the Olympic Games-1980 in Moscow were boycotted by a number of the western countries due to the war of the USSR in Afghanistan.

In spite of the fact that the strongest water polo teams of the world were present at the Olympic Games-80, and players of the national team of the USA have been included in structure of the national team of Cuba ets., – the western mass media sometimes expressed skeptical opinion on the fact that what it is a victory if at the Olympic Games there were no teams of all countries of the world?

In 1981, in the USA, in California (Long Beach) the World Cup on water polo has taken place and there were water polo national teams of the whole world. In California the national team of the USSR as a part of which my father played has crushed all rivals, including Hungarians, Yugoslavs and Americans again, having confirmed “not accident” of the victory at the Olympic Games-80 in Moscow. 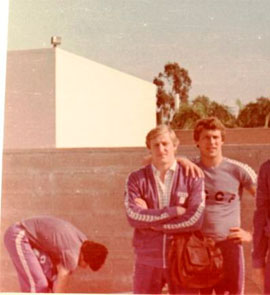 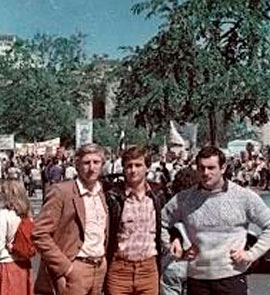 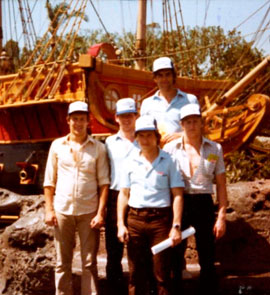 One more photo of this time from archive of the captain of USSR national team, the two-time Olympic champion Alexander Kabanov. On the photo – a national team of the USSR on water polo. From left to right standing: Skok, Mendygaliyev, Georgadze, Tretyakov, Grishin, Ivanov, Volkov, Sharonov, Mshveniyeradze, Akimov; sitting from left to right: Shagayev, Kotenko, Nikiforov, Kabanov, Ayapbergenov:

Some more interesting photos of this period: 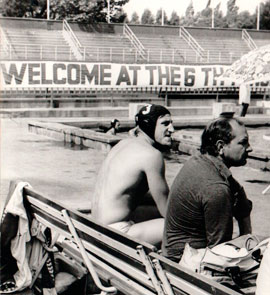 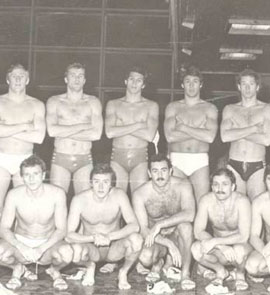 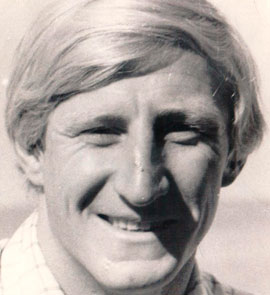 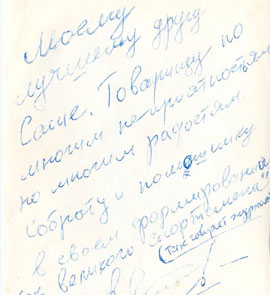 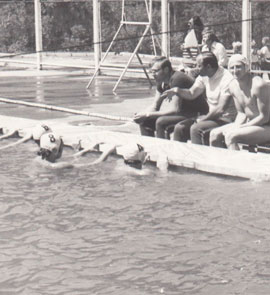 The second, even more significant victory, was in 1982 in the World Cup in the country of Ecuador.

The national team of the USSR on water polo has surely crushed all national teams of the world again, having confirmed the Champion and Olympic titles despite all difficulties.

In difficult conditions there was a national team of the USSR in the World Cup in Guayaquil (Ecuador). It was necessary to live in military barracks. Our relax was interrupted by planes which took off and sat down in the airfield located nearby. But the guys never complained, showed a real man`s character and in the pool showed truly champion game.

The correspondent N. Dolgopolov writes about the relation of judges to the USSR national team in the water polo World Cup of 1982: «Referees in Guayaquil were surprisingly ruthless to us and are indulgent to the main rivals.

In some matches they just didn’t allow to play. For the judge from Holland Van Dorpa our national team — as if a red raincoat of the toreador for the bull enraged, blinded by stupid hatred. In a match with the national team of Germany his bias, unacceptable for the international refereeing, was a bit too full.

As soon as the ball fell into the hands of our players — the flag is raised: to give the ball to the rival. Penalty kicks basically beat only the Soviet national team. Removals in USSR national team were three times more often, than in Germany team. In the game against the Danish team the number of removal were distributed in a ridiculous proportion: seven to one. It is clear that this is just ridiculous!».

And nevertheless the USSR national team has won in all games and became the World champion in water polo of 1982.

The newspaper “Sovetsky Sport” published the message about that victory and about each player of USSR national team of 1982. About Vladimir Akimov is told that: “In matches of the World Cup-1982 he was one of the strongest players”.

One more interesting photo of the period of 1981-1982 from the Olympic champion Evgeny Sharonov’s archive – Vladimir Akimov, Evgeny Sharonov and Evgeny Grishin in Dushanbe at the meeting with students.