I’ve already told a lot about the brothers Akimov, but I want to say a few words specifically about water polo dynasty of Akimovs, because all brothers were outstanding players of the best club of the Soviet Union – the team CSK Navy military, and two of them became Olympic Champions.

I managed to find a few articles with unique photo in the home archive of Nikolay Akimov – three brothers together in water at training.

It is really very rare and historical shot. The article about brothers was very colorful. It was published in Russian, English and even Arab. I will give a text’s fragment: 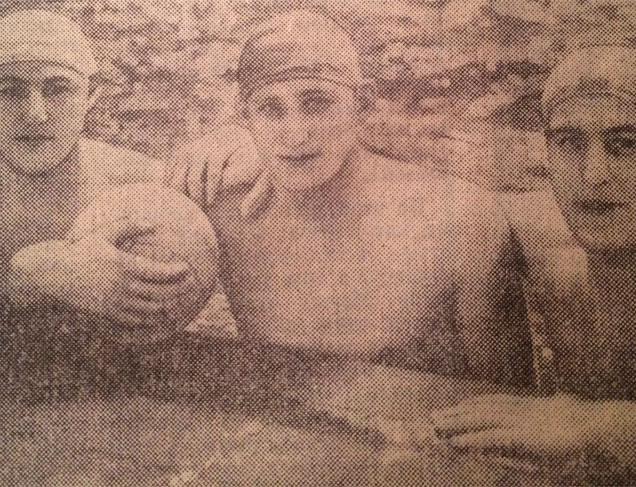 It really is a very rare and historic frame

Really, there was such period in the history when all three brothers played together — for the CSC Navy military team. It was the dynasty of outstanding athletes.

Two brothers became Olympic champions, and Victor in a team’s line-up became the numerous champion of the country, and then has been transferred to Germany. The most elder brother (I will remind that there were four brothers) — Nikolay played water polo in CSC Navy military too, but then has been transferred to Sevastopol, where his sports career continued in the team of the Black Sea Fleet.

In article my uncle – Anatoly Akimov jokes in the interview, in relation to the sister (my aunt) Tatyana Akimova: “It is a pity that women don’t play water polo, and that we would expose family team!” Whether they could know that female water polo will not only appear, but also will become the Olympic sport! 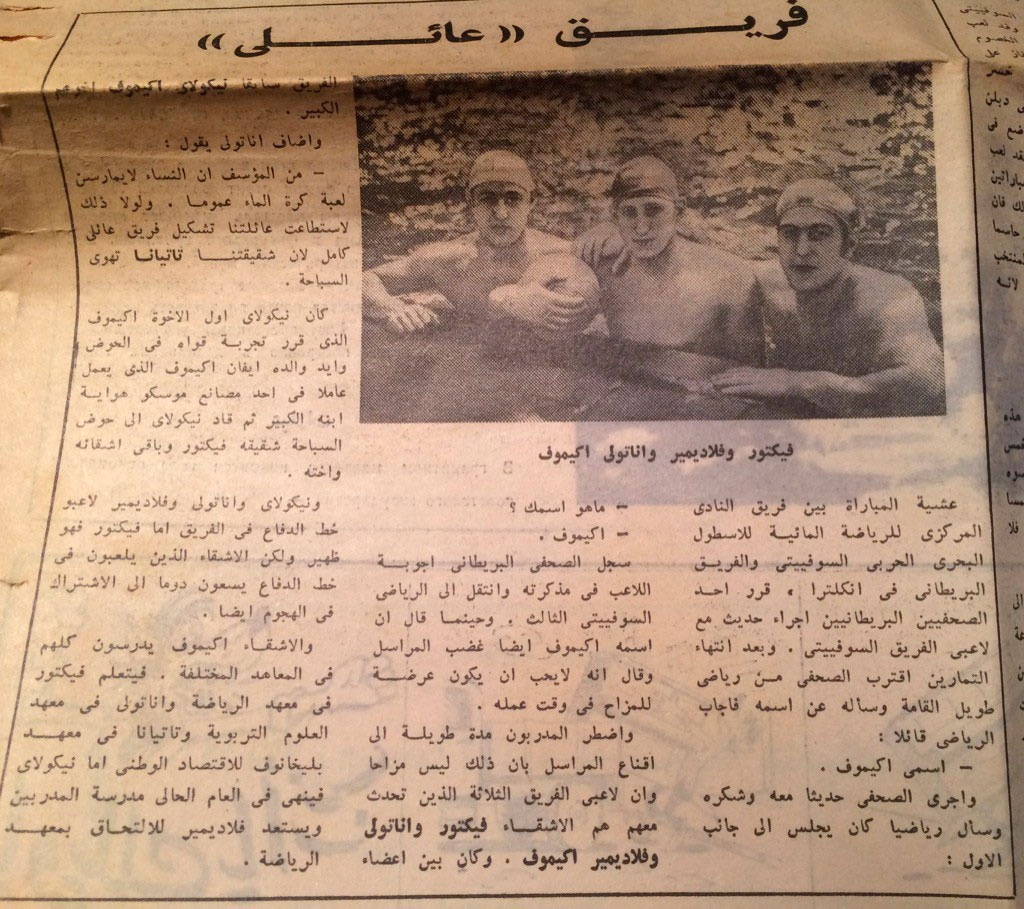 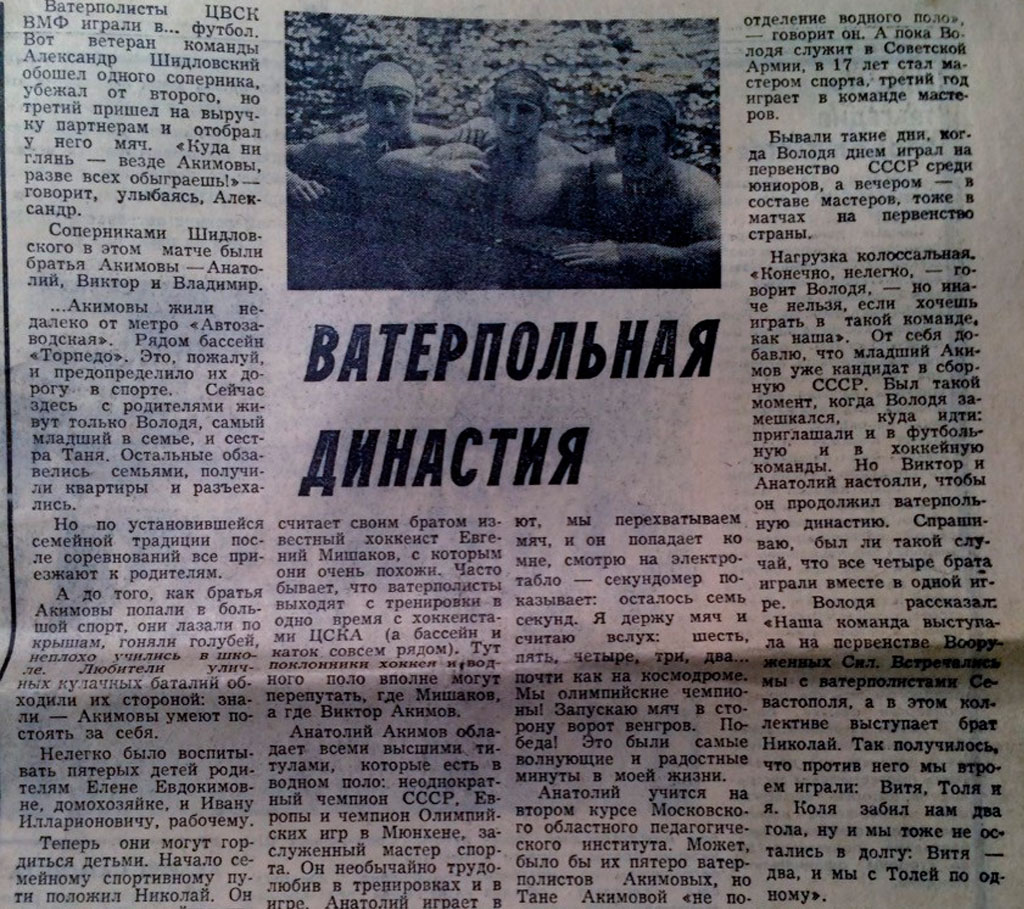 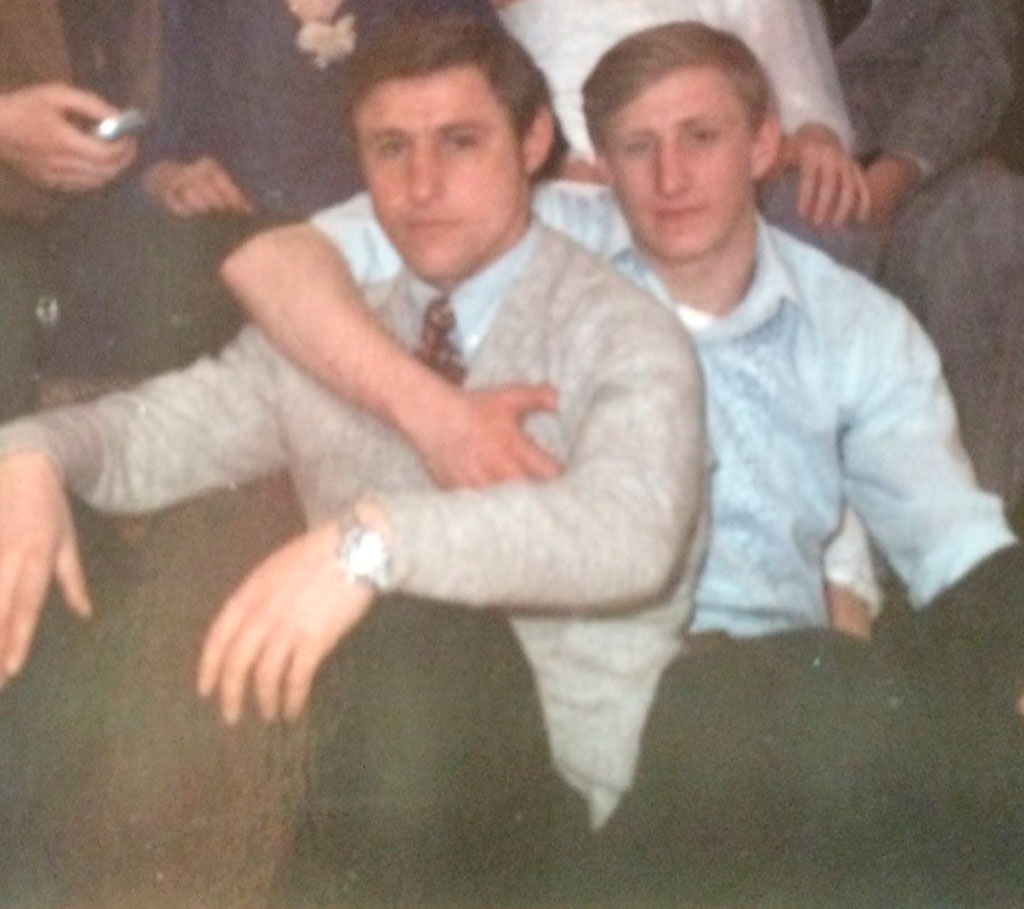 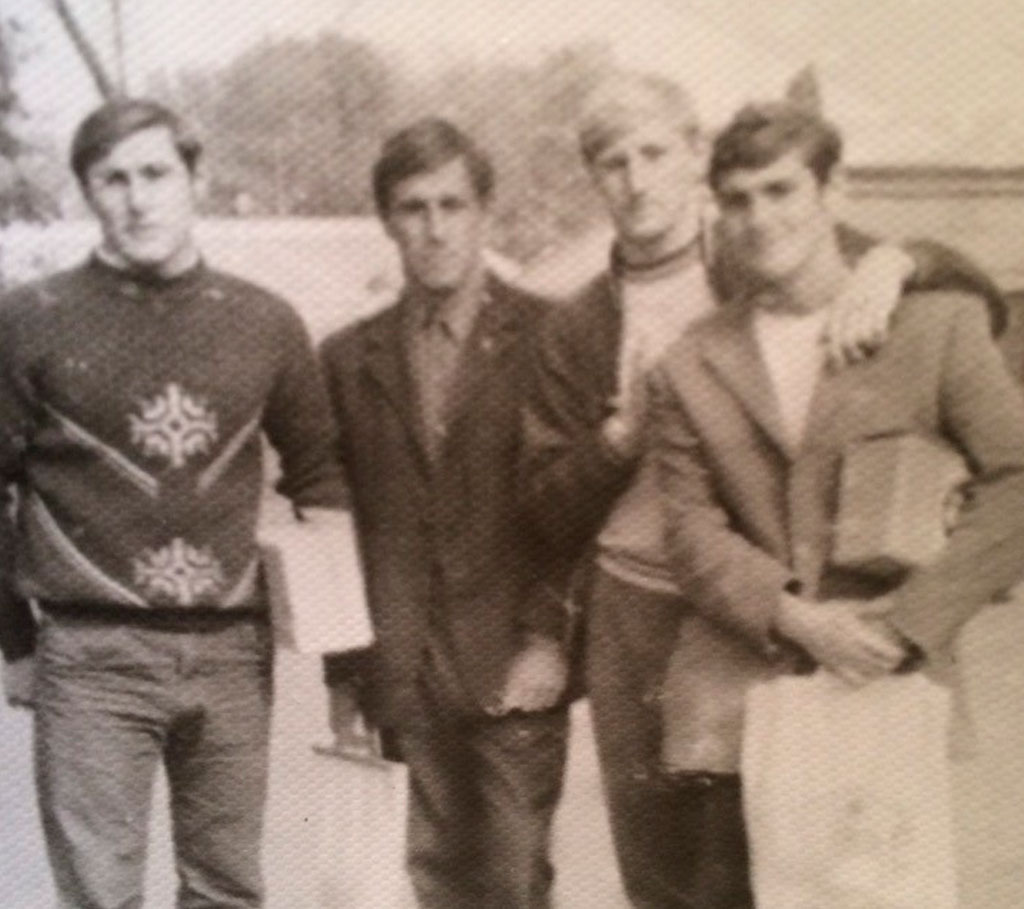 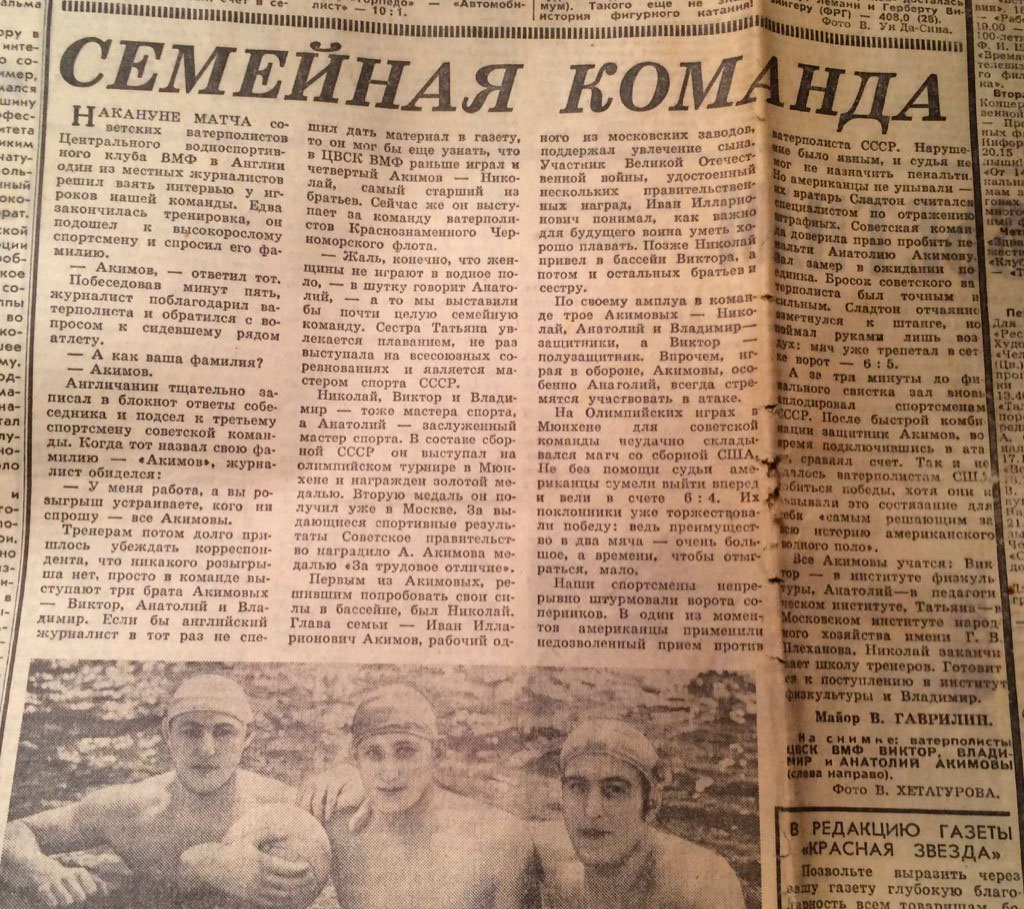 Here is a historical publication about the victory of the water Polo team CSK NAVI. The article made a mistake — it says that the photo is A. Akimov, but actually in the photo, Vladimir Akimov. 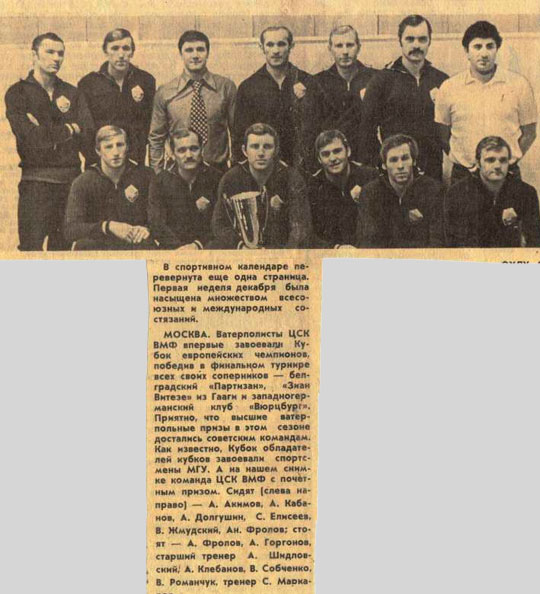 Two historical pictures, which you can see the Akimovs brothers – Vladimir and Anatoly in the team CSK NAVI.

V. G. Sobchenko has provided me a unique photo 1975 from the press of those years in which the brothers Akimovs stand together in defense of the gates CSK NAVI (Vladimir is on the left, Anatoly — on the right, on the gate — Vyacheslav Sobchenko). 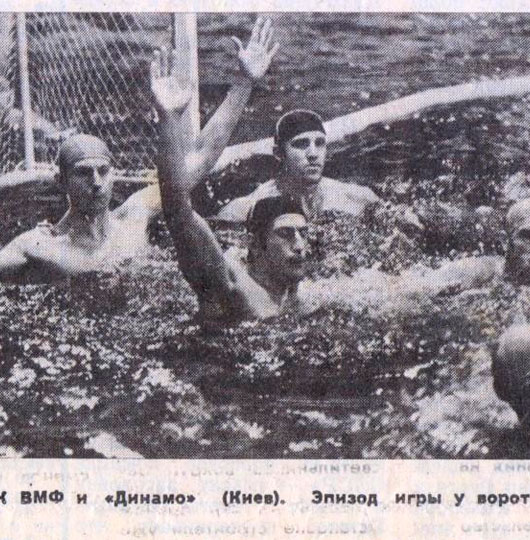 Another team photo 1974. Team CSK NAVI’s water Polo, which my father — Vladimir Akimov (centre), he was here for 21 years and my uncle Anatoly Akimov (far right, at the time — already Olympic champion in Munich 1972). 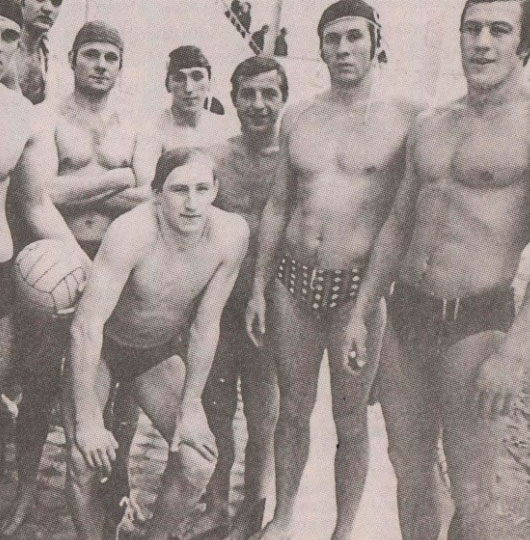 Another unique photo, which in the frame of three brothers Akimovs with the legendary water Polo player Alexei Barkalov and Mintay Rakhimov. 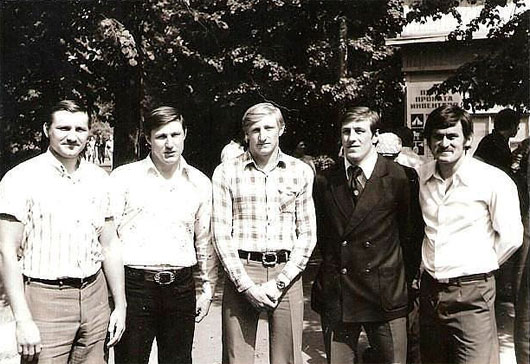